Like every inevitable disaster surrounding Techies, the obliteration of Dredger's Bight began with an invention. Tasked with designing a safer way of detonating explosives in the mines beneath the city, pyrotechnic prodigies Squee, Spleen, and Spoon developed their most outlandish creation yet: a button which, when pressed, would trigger a distant device to spark a fuse.

Overeager to test their invention, the trio stuffed barrel after barrel with flamesalt explosives, piling every corner of their tiny workshop high with the newly developed remote bombs. From this stockpile they plucked a single payload, burying it in a far away field. As they cowered in a ditch, Spleen pressed the detonator button. Yet after a moment, nothing happened. Confused, he stood up, pressing his button again and again until, finally, an explosion tore a hole in the field. Elated, Squee and Spleen turned toward home just as a massive wave of sound and force arrived to knock them over.

Bewildered, their ears ringing from the unexpected blast, they gathered in the dingy miasma to see a smoking ruin where their workshop once stood. Chunks of wood and stone continued to fall as the yawning crater before them slowly deepened into an expanding pit. The whole of Dredger's Bight shuddered, and then gradually started to slide into the mines below as its panicked residents fled.

Sitting at the edge of their sinking home they grinned and giggled, as giddy at the possibilities as they were oblivious to the scorn of their former neighbors. They wondered only one thing: how could they trigger an even bigger blast?
Model and texture files
Use the hero model to see your item in context. Download Techies model
Item slots and their budgets
Squee
Spleen
Remote Mines
Spoon
Bazooka
Sign
Cart 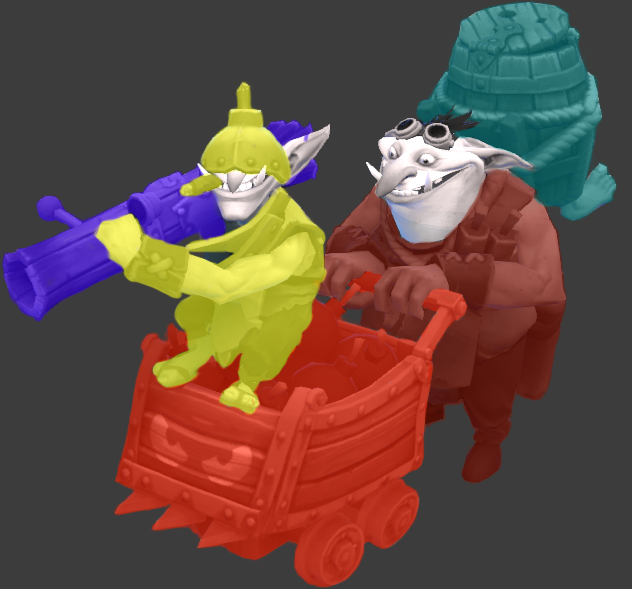