Karroch was born a child of the stocks. His mother died in childbirth; his father, a farrier for the Last King of Slom, was trampled to death when he was five. Afterward Karroch was indentured to the king's menagerie, where he grew up among all the beasts of the royal court: lions, apes, fell-deer, and things less known, things barely believed in. When the lad was seven, an explorer brought in a beast like none before seen. Dragged before the King in chains, the beast spoke, though its mouth moved not. Its words: a plea for freedom. The King only laughed and ordered the beast perform for his amusement; and when it refused, struck it with the Mad Scepter and ordered it dragged to the stocks.

Over the coming months, the boy Karroch sneaked food and medicinal draughts to the wounded creature, but only managed to slow its deterioration. Wordlessly, the beast spoke to the boy, and over time their bond strengthened until the boy found he could hold up his end of a conversation. He could, in fact, speak now to all the creatures of the King's menagerie. On the night the beast died, a rage came over the boy. He incited the animals of the court to rebel and threw open their cages to set them amok on the palace grounds. The Last King was mauled in the mayhem. In the chaos, one regal stag bowed to the boy who had freed him; and with Beastmaster astride him, leapt the high walls of the estate, and escaped. Now a man, Karroch the Beastmaster has not lost his ability to converse with wild creatures. He has grown into a warrior at one with nature's savagery.
Model and texture files
Use the hero model to see your item in context. Download Beastmaster model
Item slots and their budgets
Head
Shoulders
Arms
Weapon
Belt
Bird (Ability 2)
Beast (Summon) 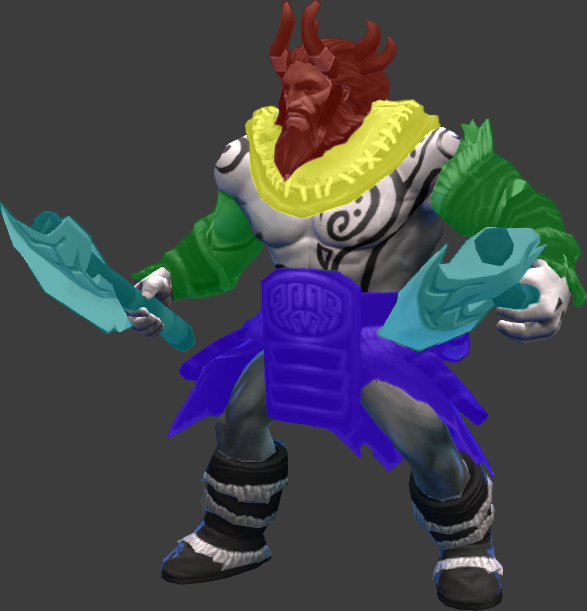