For 500 years the mountain pressed down upon him, only his head free from the crushing weight of the stonewrought prison the elder gods had summoned to halt his childish rebellion. Moss grew along the lines of his exposed face, tufts of grass sprouted from his ears; his vision was framed in wildflowers reaching from the soil around his cheeks. Most thought him long dead, tormented by the gods for waging war against the heavens until naught but his legend survived. But, as the stories go, the Monkey King cannot die.

So he waited. Until the gods came to offer a chance at absolution, he endured. And when they did come to name the price, Sun Wukong accepted their charge: he would accompany a young acolyte on a secret pilgrimage, protect him from demons and dangers of the road, and guide the man home in possession of a coveted relic. Do that, and humbly obey the human's commands in service to their holy mission, and Wukong would prove himself reformed.

For a change, Sun Wukong fulfilled his oath to the gods with honor, and atoned for the sins of past insurrections. The acolyte, much learned in hardships, was returned to his home temple, relic in hand; and Wukong-finding himself for the first time in proper standing with any gods of consequence-was content for a short while to give up his old thirst for adventure and glory. But the Monkey King was born for mischief...and offending the gods never gets old.
Model and texture files
Use the hero model to see your item in context. Download Monkey King model
Item slots and their budgets
Head
Shoulders
Weapon
Armor 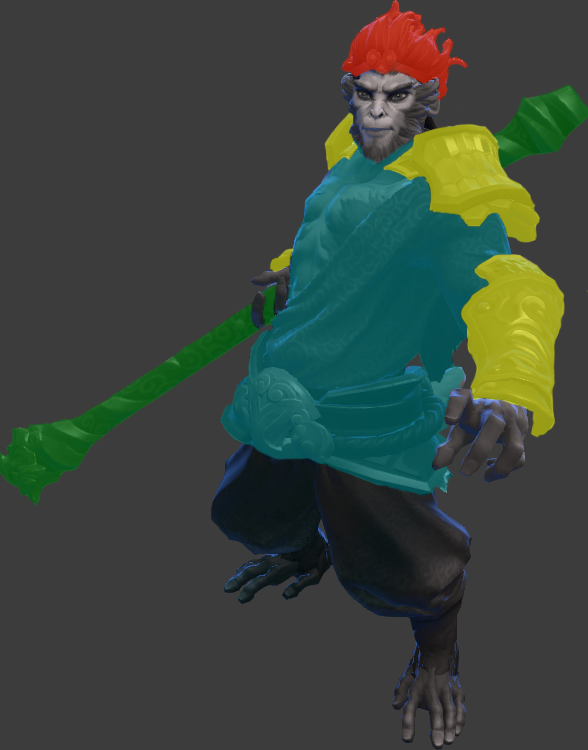